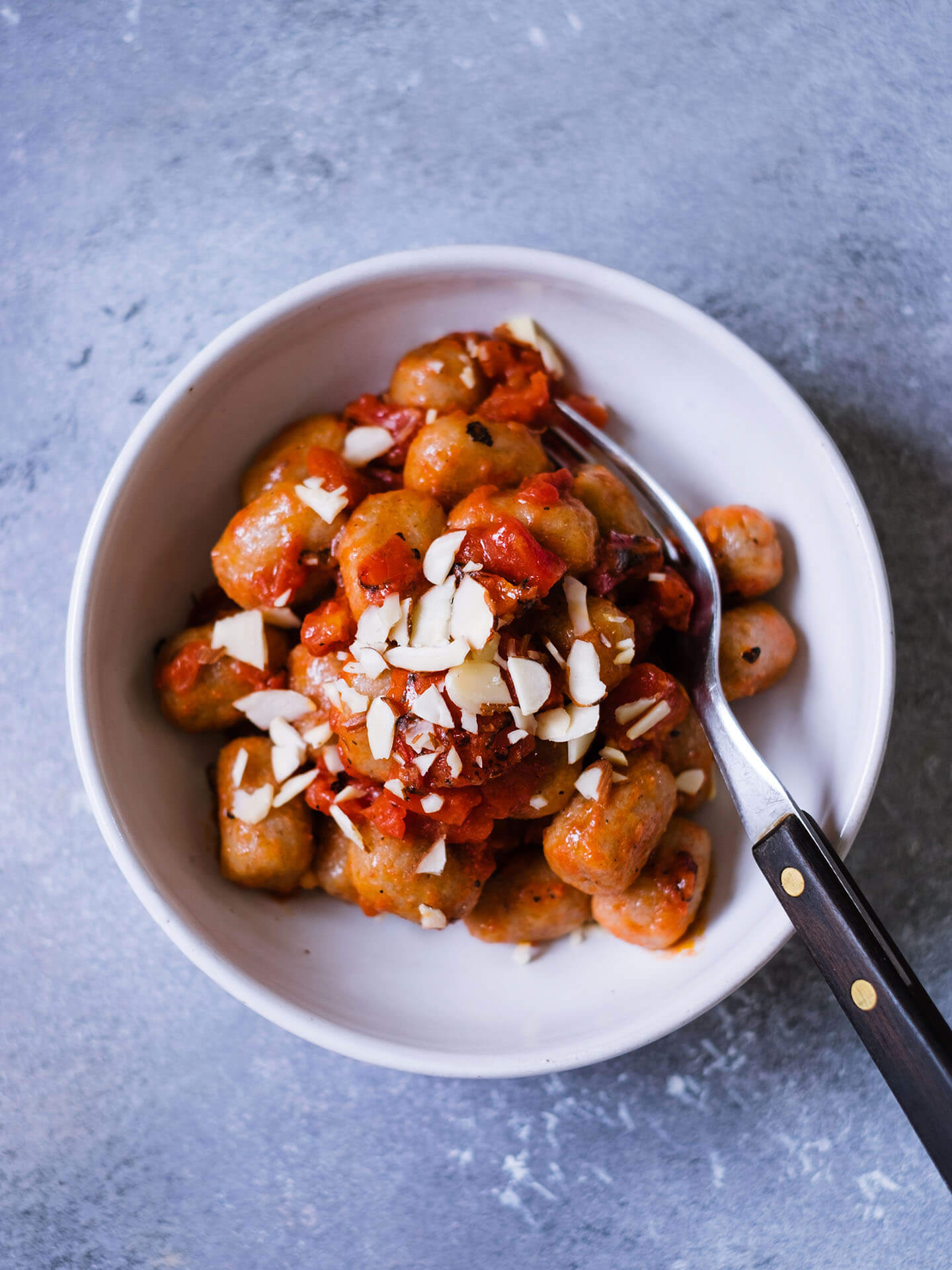 Potato gnocchi is one of those traditional recipes that every Italian woman prepares in her own way: some steam the potatoes, others boil them; some add the flour when they’re still warm, other when they’re completely cool; some add a little amount of flour, others a ton. Because gnocchi are personal, somebody like them soft while someone else prefers them a bit harder. And of course there’s the egg factor: almost everybody in every region uses eggs, while the traditional veronese (Verona is my hometown) recipe doesn’t require them, only potatoes and flour.

We celebrate Carnevale in Italy and the last Friday of the carnival period is called “venerdì gnoccolar” and, as you can imagine, you have to eat gnocchi! My mother-in-law’s family usually celebrate it cooking together and gathering everybody around the same table to enjoy them, so I’ve been there too for a couple of years. During one of the latest calls with her, she said “We’re organizing for this year” and Lorenzo was a bit nostalgic. Since I already had some potatoes in the fridge from the previous Imperfect Produce order I decided to try – in an extremely worried way. You know how picky is he.

I briefly asked for help on my Facebook page, especially because I remembered about a potato cooking method that I saw years ago that made me think “this seems to be really impossible to fail”, but I wasn’t able to remember who was the author and what exactly was! And then Giulia saved me, she was the author! I followed that method – slightly changed to speed the process – and they came perfect!

I decided to keep the sauce really super duper simple, because, first, this is kinda traditional, and, second, making homemade gnocchi is stressful enough if you’re a novice, don’t go crazy for the condiment too. 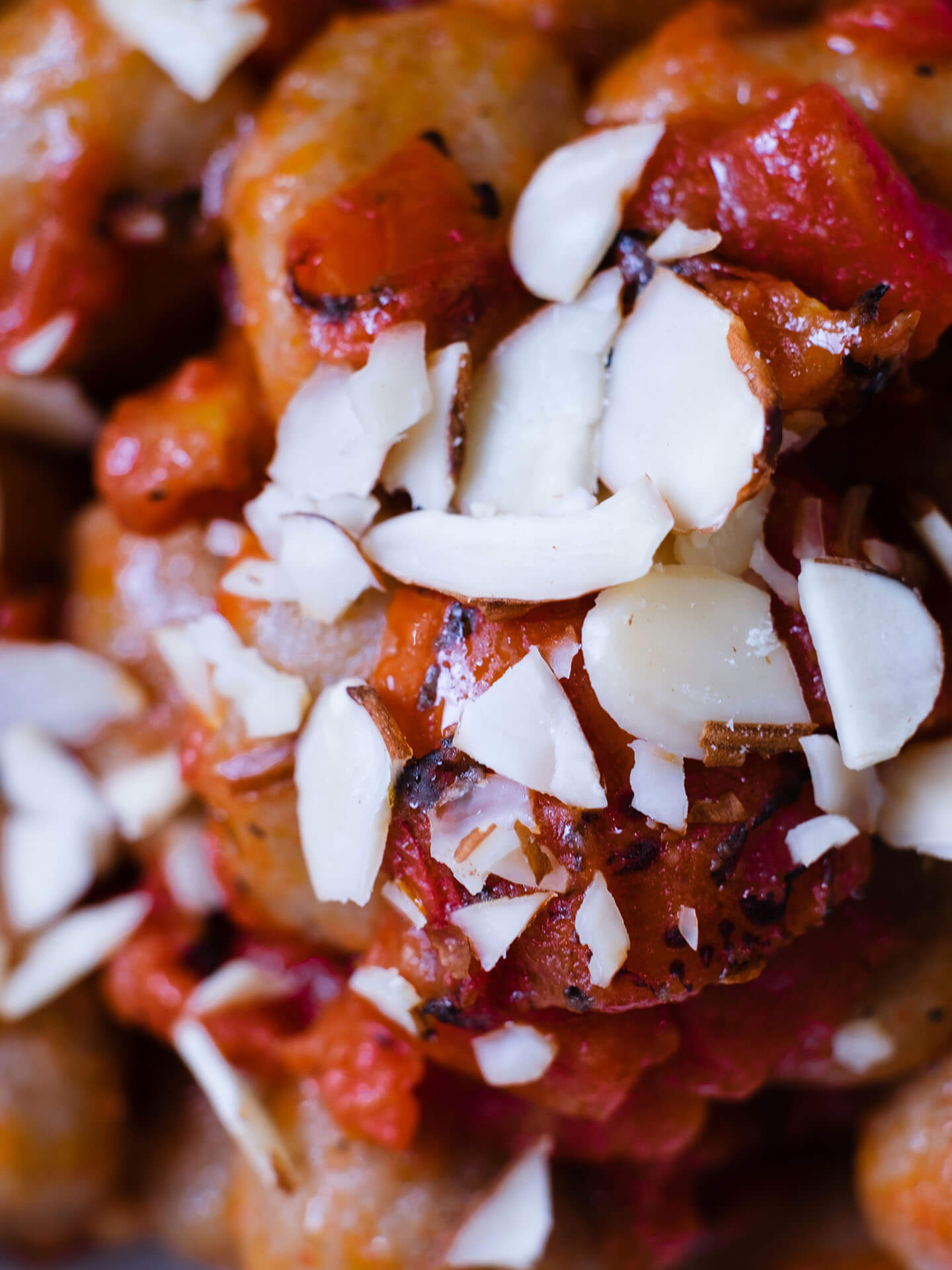 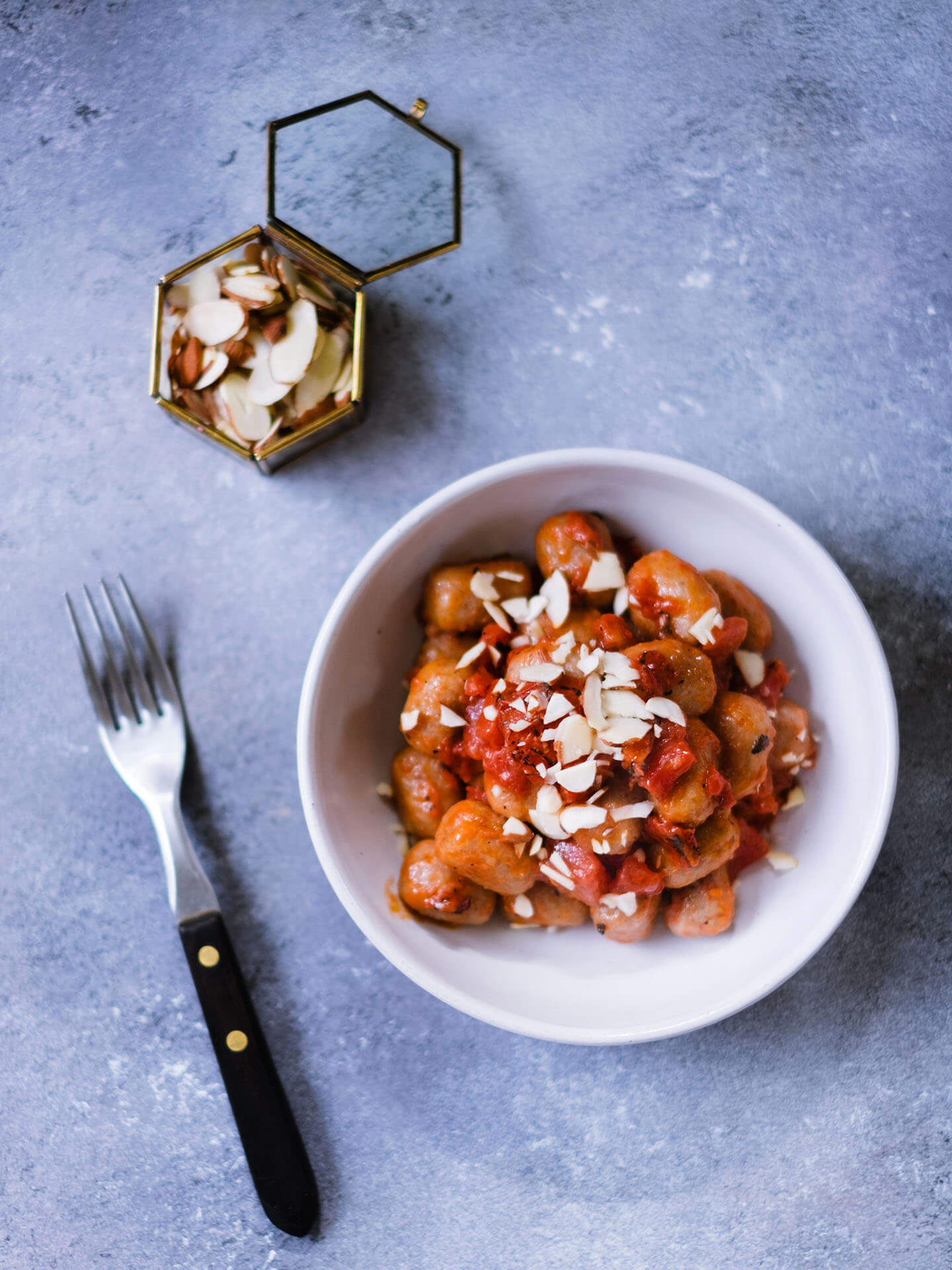 I usually like to use the smallest amount to obtain softer gnocchi. This means that I’m not usually able to go for the traditional shaping method, so I simply pinch a little piece of dough, I roll it between my hands like a truffle, and I give it the last roll over the board to create a more cylindrical shape. And I go on in this way until the end of the dough.

Preheat oven to 375° F (190° C), put a parchment paper foil over a baking tray and spread a quite thick layer of sea salt over it.

Brush and wash well the potatoes, slice them into two halves, prick them with a fork, and lay all four pieces over the salt with the skin upside and the sliced part touching the salt.

Bake until you can easily insert a fork into the whole pulp. As soon as you can handle them, remove the skin and mash them with the fork over a wood/pastry board. Let them cool.

Sprinkle the flour over the potato pulp and knead. You may need more or less flour to be able to handle it – see notes.

When they’re all formed, bring a big pot of water to boil and add a fat pinch of coarse sea salt. Lower the flame to medium and start dropping a first half or third of the gnocchi. When they come to the surface, pick them up with a skimmer and drop them directly into the pan – read below. Then drop another portion of gnocchi into the water and repeat the same steps until you have no more gnocchi.

Pour the extra virgin olive oil and the tomatoes in a large non-stick pan – I always use my Kyocera wok when I want to be sure nothing is gonna stick – and season with salt and pepper. Switch on the flame to medium and let the sauce simmer for about 10 minutes. Add a few tablespoons of the gnocchi cooking water if it reduces too much.

When all the gnocchi are in the pan, gently stir to combine until they’re covered with the sauce. Serve and sprinkle with some almonds. Buon appetito!